Please don’t click by Michigan, Minnesota, Wisconsin and Wyoming.
Step up and call your senators. Contact information is in this reblog post.
Wolves are not the enemy. Stupidity and misinformation are. 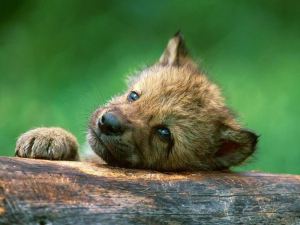 “It is imperative that wolf delisting language, along with other harmful policy riders that weaken the Endangered Species Act, are kept out of upcoming government funding negotiations.” ~ Howling for Wolves alert.

Wolves are again the target of blood lust. This time riders are being attached to a must-pass federal budget deal. They throw Michigan, Minnesota, Wisconsin and Wyoming wolves off the Endangered Species List, permanently, and bar the courts from protecting them. The courts have been the only check and balance on good ol’ boy trophy-killing of wolves. The riders authored by Sen. Ron Johnson, R-Wis., and Sen. John Barrasso, R-Wyo., endanger the authority of and scientific standards set by the Endangered Species Act as a safeguard for survival of species.

I always rather liked Karma. We’ve disagreed – my fault – a time or two but mostly, she’s done me square.

What I like about Karma, is that she’s all about balance and she totally let’s you take the wheel.

Unlike Revenge which can be driven by mindless rage, however well justified that may be.

Not like Justice either. Justice looks after the blacks and whites. She misses a lot of the grey area where our selfish justifications live.

Karma’s simply about bringing the universe back into alignment. The keeper of Newton’s Third Law.

Sometimes, Karma has a warped sense of humour. She sure has got me a few times!

Finding a mouldy blob in the fridge instead of the piece of chocolate cake you hid from your brother is Karma.

Karma gets a bad rap but that’s because she hangs out with humankind so much.

Her favourite messengers aren’t typically the Four Horsemen of the Apocalypse.

No. Usually, it’s just another human. Delivering the lesson, be it good or bad.

That’s not to say that her invisible kick in the seat of your ethics isn’t gonna hurt like a bastard.

Or that onlookers might not be glad that it does. Let’s face it: Karma can borrow Justice’s clothes

Man! She has a resting bitch face that looks a hell of a lot like Revenge too.

Karma doesn’t pick the sides though. She’s the ripples in this ocean caused when YOU drop the stone.

It’s all about balance.

You have an affair with someone else’ partner on-line. Justice is like, “What? I didn’t see that”. Revenge is all, “Let me at that skank bitch”. Karma doesn’t judge. She doesn’t give a shit.

Eventually, the ripples are going to reach the opposite side of Life’s shore.

Maybe to the woman who has the passwords to his computer.

With that: the cycle and lessons of Karma for each of us as individuals begins. 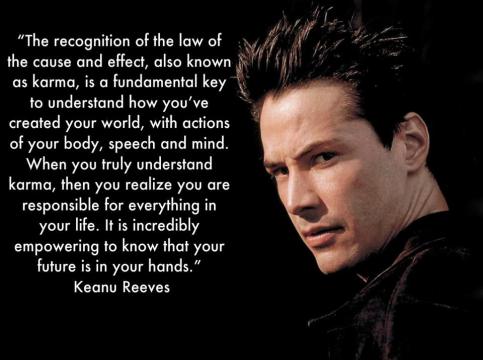 It’s particularly fitting that my eldest child’s birthday falls on Mabon this year. May yours be filled with joy.